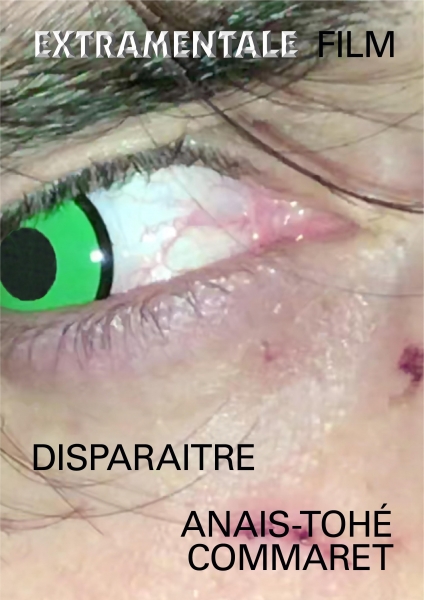 A young man, facing the camera, is seating in a van whilst talking to us out loud in the dark. Filmed during a nighttime journey with no great destination, he gives off a cynical laugh that blends itself with the wind saturating the recording. Behind our screen, we can hardly guess who he is, where he's going, if the High-School Diploma he's talking about is a true fact. Nothing seems to be done that would allow us to hold on to his voice. This character rising above the ground, seating on his van, is already replete with desires from elsewhere. And he manages to do so, through a green light that lands on his hand like a ladybug on a phalanx. Through this light, within it, he disappears.

Disappearing is the title of the first episode directed by the young artist Anaïs Tohé-Commaret, currently studying at Le Fresnoy (Tourcoing, France). Born in 1992 in Vitry sur Seine (Val-de-Marne, France), from a Chilean mother and a French father, she spent her adolescence away from the reality that she dreamed of : Paris with its museums, its cinemas, and the general feeling of having art in a near location. Time feels elongated and gray. With her parents' VHS camera, Anaïs films her friends and her direct environment.

Inspired by her mother's life, as well as by the work of filmmakers such as Buñuel, Farocki or Apishapong, approaching harsh reality through the lens of the dreams, the magic, the absurd and the surreal, she directed her first short film, Mon Ami Djoudi (2017), selected at the Côté Court festival. She films her friend Djoudi, their exchanges, his relationship to love, his difficult construction of intimacy in his domestic space in the suburbs, and his maked-up face, that brings Djoudi in a parallel register, located between dream and terror.

With Mon Ami Djoudi and Disparaitre, Anaïs transcribes the shared desire to escape reality into a film, taking perhaps her inspiration from this intimate feeling that matters most of us, when we are facing a scarcity of imagination. And this happens in the suburbs, but not only, since the fading away of dreams is a shared affair. Through her fascination for the adolescence, her films are depicting characters - sometimes bearing seemingly carnavalesque make-up - who oscillate between great naivety and a real incarnation of their beings. Here, a ferocious imagination is activated, that awakens their ghosts without hindrance and without fear.

In Disparaitre, this fantastic yet humble sign of this breakthrough towards an elsewhere is embodied in the the unreal luminous mass that nimbles the adolescent, as if « the character had freed himself from the frame, freed from his cynical clown posture, laughing at a situation that is not dramatic, but almost ».

The howling wind that saturates the recording could be one of those « tornado winds » which, from Michael Salerno's Elri Paints Himself as a Tornado to David Foster Wallace's Tennis, Trigonometry, Tornadoes : A Midwestern Boyhood, allows American teenagers to transcend everyday situations, with their overload of trauma. The monster tornado ends being an ally since it can be assimilated. In Salerno's film, it is in fact the tornado itself that serves as a make-up palette for the young man, who decides to look alike. In Anaïs' film, the tornado wind is a strong evening air, a crazy wind that seems to be able to transform everything through the color of the green light. As a matter of fact, it is under this happy sign that she begins a new series of short formats, conceived as a series of portraits of people who manage to find their way out of an undersized costume.